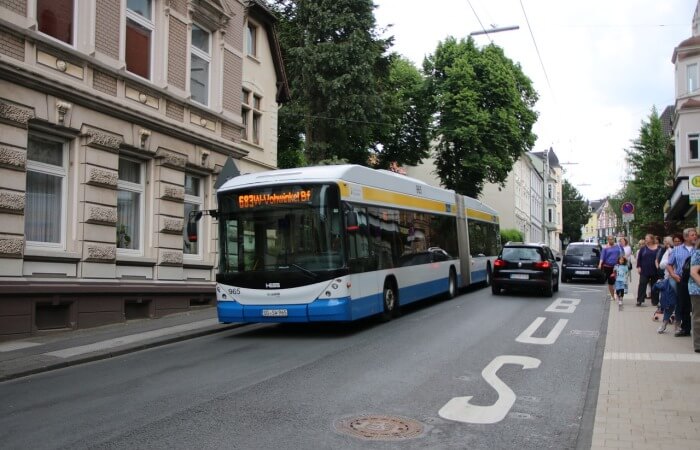 A bus is a vehicle intended for the carriage of passengers on roads with a firm covering, which is able to move due to the traction electric drive.

The buses in Moscow and other major cities. The need to use

Electric buses – what is it?

Design and features of electric bus

The advantages of electric buses compared to traditional modes of transport

The use of buses on real examples

The buses in Moscow and other major cities. The need to use:

Technological progress is identified with the process of forward movement. The final result of the evolutionary development of science and technology become innovations that can facilitate the life of modern citizen.

To the intractable issues of development of infrastructure of large cities should be attributed to the transportation problem.

In the current realities of big city life, the question of transport is one of the most relevant. To optimize ridership, especially during peak hours quite difficult, given the large distances between residential areas and the historic centre and business districts. Up to the present time the problem of increased passenger traffic, the city authorities have decided, due to the organization of trouble-free operation metro, using ground modes of transport: buses, trolleybuses, trams, taxis.

Why in current situation efforts aimed at the modernisation of transport infrastructure have acquired such an unusual turn?

The fact is that the city government of any metropolis, take for example Moscow or Saint-Petersburg, very interested in the replacement and modernization of the current traffic base that supports the huge passenger traffic. Not the last role in this process is played by environmental component. So, for the historical center of the city is extremely important to get rid of unwanted mesh of wires and communications that form the trolleybus infrastructure, so spoiling the face of the city. Replacement of trolleybus lines on the trams is an extremely costly project that can afford every metropolis. The launch of bus service in this part of town will harm the environment and the prestige of the metropolis, so the appearance of buses can be a target solution.

The capital of any country is always the first presented the best advanced solutions, so the buses in Moscow and began the project that meets the criteria of innovative (futuristic) approach practiced in the process of development of urban infrastructure.

Electric buses – what is it?

In a simplified perception, the electric bus is a larger version of the electric car, but unlike the latter, capable of carrying dozens of passengers.

The definition of bus is more precisely defined in Wikipedia and other sources, which says that the electric bus (abbreviated to a bus) is a vehicle designed for the carriage of passengers on roads with a firm covering, which is able to move due to the traction electric drive. Traction electric drive provides electric energystored in the drive. The bus is moving on a specified routehaving the corresponding number. The complexity of the work interacting parts and mechanisms of the electrical system of the vehicle determines the autonomy of the electric bus.

Design and features of electric bus:

The electric bus according to many criteria, reminiscent of a city bus, however, in the overall vehicle concept the new generation corresponds to the electric vehicle.

The source of electrical energy is a battery of large capacity, which can be located in the rear compartment, special body compartments or on the roof. This element of an Autonomous system is often called drive. Traction motorusing electrical energy supplied from the battery (storage device) drives the leading wheels of the bus.

Thanks to the latest advances in the electrical industry has managed to significantly extend the operating life of the batteries on the buses. New batteries are more known as ultracapacitors (electrochemical double-layer capacitor, supercapacitor or supercapacitor). Widely practiced using other types of storage of electric energy, for example, deserves the attention of the latest version of hydrogen fuel cells.

The dimensions of the bus and classic bus model are similar. A length of the electric bus is 12 meters, width is about 2.5 m, height – 3,5 m. any manufacturer can stick to their preferences in relation to the size of the vehicle, however, in accordance with the conventional approach, the size of electric vehicles must meet the criteria of capacity, maneuverability, comfort, and can not differ from the standard forms of city buses. Plenty of buses can reach 18 tons, the average capacity of the bus – 90 passengers, and the level of the floor of the passenger compartment – 36 see

The bus accelerates to 80 km/h and maximum cruising range without recharging the battery reaches 200 km from large cities such distances do not limit, however, if we consider the length of a standard bus route, the use of buses is perfectly logical and reasonable. To battery to maintain, you need to provide them with periodic charging, the restoration to the required operational parameters. Full recovery period of a battery electric bus is approximately 6.5 hours. However, the subject rechargeable battery is continually evolving and already there are batteries that get charged in much shorter time.

A variety of buses proposed at the moment by the manufacturers is small and depends on the principle of charging.

Therefore, for understanding the functioning of the buses it is important to know how is the restoration of their charging base. Today focus on 4 species composition of ground trackless electric transport:

– electric buses that use charging the battery while riding,

– electric buses with fast charging state and the destination stops of public transport,

– the buses, the replacement of batteries.

Electric buses that use charging the battery while riding:

Electric buses that use charging the battery while riding – in fact, this type of buses is no different from the modernized trolleythat can move along the route in the normal mode, however, which has a few advanced features in terms of maneuvering. While driving such a vehicle can not only periodically recharged by the contact network, but also to overcome the problem areas yourself. In other words, part of the route the bus travels by the battery, and the rest of the way with a raised “horns” to recharge.

The introduction of electric buses in the framework of the proposed approach is suitable for cities with well-developed trolleybus infrastructure and is currently active in St. Petersburg.

Electric machines of this type – electric buses, night practicing exercises – today not so much. The fact of large costs for their upkeep and maintenance. Typically, electric buses, night practicing exercises in the daytime serve urban passenger traffic, and in the evening become immobilized in specialized depot (charging station). To fully restore the batteries to buses requires up to 6.5 hours (depends on batteries). The main drawback of electric cars with night charging their huge mass, because the battery equipment takes a lot of space and is heavy. Another disadvantage of electric vehicles is the need to build a powerful fixed stationto provide simultaneous charging of dozen units of buses in the night time. The advantage of using these models of buses is a benefit to save the city’s budget, not to Fund the construction of trolleybus infrastructure and redeem the earth under charging stations.

Electric buses with fast charging state and the destination stops of public transport:

This method of replenishing the battery charge level of the vehicles has long been practiced in different cities of the world. A feature of the proposed method of charging the batteries is the need for a supply of electricity to the stops and the erection of a certain number of substations in the city.

The disadvantages of the described method include: over-saturation of urban areas with technical infrastructure; the risks of accidents of electric equipment of substations, which is especially important for densely populated areas of the city; the need to hire more drivers and equipment; to stand on end stations of buses in the queue for charging.

On the positive side should be attributed the slight loading of buses with different technical stuffing and, consequently, lower vehicle weight, which improves maneuverability in traffic.

The buses, practicing the replacement of batteries:

For some time the routes of cities began to produce buses with an original schedule of service batteries. We are talking about a quick replacement of implantable batteries to their charged counterparts prepared in advance and served at special service stations. It happens this way: the bus goes into a special box, where the staff quickly replaces the old batteries in their recent versions. While this kind of service a rechargeable base is only available for the high floor buses.

The advantages of electric buses in comparison with traditional types of transport:

To the obvious advantages of using electric buses include:

– the minimum damage to the environment,

– roominess of the cabin and elegant design,

– additional services to passengers by offering free, e.g. access to the Internet via WI-FI,

– the opening up of Central and business districts of the metropolis from lead wires, etc. of the technical infrastructure,

savings on the city budget, for the expense of a costly foreclosure land for the construction of new metro lines, trolley-bus substations, laying of the tracks for the tram routes etc.

The use of buses on real examples:

At the moment the big successes in the implementation of this innovative project reached the United States, Sweden, Czech Republic and China.

Among the CIS countries are actively introducing electric buses, Belarus and Russia. In Saint-Petersburg on the line let the buses practicing dynamic charging while driving. In Moscow took the path of complete replacement of the trolley line, running routes, electric buses with fast charging at bus stops and destination.

Prospects of development and challenges standing in the way of mass adoption of electric buses:

The appearance of the buses is not a coincidence due to the fact that in the big cities on the background of constant growth of traffic flow becomes relevant to the question of ecology and safety of life. With time in large cities is expected to dismantle trolley lines while running on the routes of the buses.

Actively experiment with the introduction of electric buses Tula, Novosibirsk and other cities of Russia.

Unfortunately, today, there are a number of issues preventing widespread adoption of electric bus on city routes. One of the main reasons preventing to realize such a promising project include high production costs of machinery, storage of electrical energy, of the technical infrastructure. And buy electric buses will have the expense of means of the city budget.

Do not forget that a quick start of electric bus on city streets any time soon is unlikely, since it is necessary to prepare the technical infrastructure, while addressing the issue of full/partial dismantling of the existing trolley lines.

In General, the introduction of electric buses in the urban network of public transport – the inevitable and uncontested process, the implementation of which depends entirely on the insistence of the city authorities.