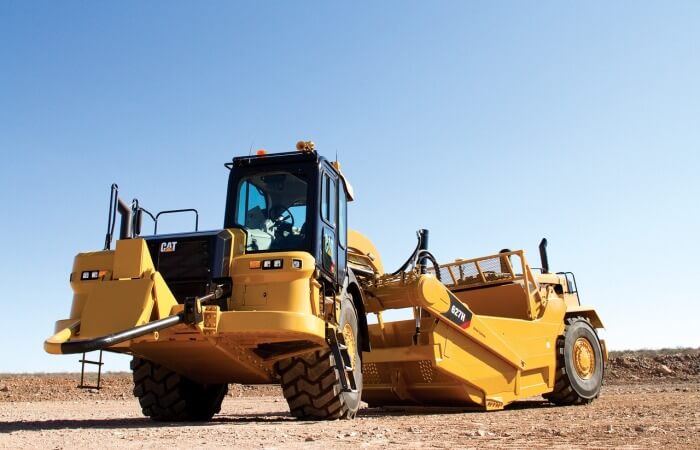 Scraper, types, and kinds, of its working equipment.

Scraper – wheeled vehicle, having an outdoor bucket with cutting edge, located between the front and rear wheels, which cuts, picks up, transportere, unloads and distributes the material when moving forward.

The advantages of scraper

The working and auxiliary equipment scraper

The use of scraper

Scraper – wheeled vehicle, having an outdoor bucket with cutting edge, located between the front and rear wheels, which cuts, picks up, transportere, unloads and distributes the material when moving forward.

The scraper is one of the types of earth-moving mechanical equipment. The task of this machine – level (in horizontal view) the cutting of soils, their subsequent transport and dumping in designated and pre-prepared structures. The latter requirement can also be fulfilled and the parameters, taking into account the layer-by-layer filling.

One major advantage of the scraper is the fact that its use requires no additional equipment – gruzopodyomnih machines, tractors , etc., because when driving their dense wheel is able to compacted paved layer of soil.

Scraper or scraper – the name of the car, descended from the English “scrape” – scrape. The scraper is designed to use to work on all types of soils (I-III type) of soft, pliable black soil to heavy clays. If there is a particularly dense layers (lots of rocks, etc.) requires preliminary soil treatment with rippers.

The feasibility of using mechanisms takes into account the range of transportation of the cut soil. So, the ideal distance for scrapers in Assembly with the base crawler tractor is considered to be cut from 100 to 800 metres and 1 kilometre. The reason is that the speed of movement of the tractor depends on the capacity of the scraper – the bigger it is, the faster it can move. However, at distances exceeding 1,000 meters, more advantageous (from a financial point of view) to use dump trucks, loading soil which is carried out by excavators. If you need to transport the soil to a distancenot exceeding 100 metres, more profitable to apply the classical bulldozers.

During transportation of the soil on the cut from 300 to 3000 meters is also preferable to use scrapers in the unit with a basic, high-speed wheeled tractors, but a lot depends on the environment in which will move the machine. Thus, the uneven ground, including the roads, the scraper will overcome with less effort than the truck.

Types and data types of earth moving vehicles very much. Their main difference is:

– the types of the installed main and auxiliary equipment;

the parameters of the latter;

– nuances of movement and control.

The scraper choice depends on the conditions in which it will operate.

The main difference scrapers is the way to travel. Distinguish:

– towed scrapers. Made in the Assembly with a crawler tractor and have two axes, which absorb the weight of the machine and the contents of the bucket in a filled condition;

– semi-towed scrapers. Design involves aggregation with wheeled tractor with one axle. With the help of the drawbar half of their mass distributed on the axle of the tractor.

In turn, the towed scrapers are divided into types:

– on the basis of the crawler tractor;

– on the basis of the wheeled tractor (tractor).

The type of boot scrapers are:

– with the use of traction for base load (scrapers standard);

– with the turn of a single axle of the tractor;

The number of axes scrapers are divided into:

– two-axle scrapers, designed on the basis of uniaxial trailer truck;

tri – axle (semi-trailer) scrapers at the base of the truck with two axles.

The number of engines distinguish scrapers with one or two motors.

The drive system of the scrapers are divided into machines with:

Also, when choosing a scraper take into account additional parameters such as bucket capacity. Bucket capacity (measured in cubic meters) can be:

The most popular is the average volume.

According to the method of discharge of the soil from the bucket there are scrapers with:

– rollover of primer forward or reverse;

– pushed forward the rear wall of the bucket;

The type of management of the work equipment is isolated scrapers:

The most popular scrapers are equipped with hydraulic system control, as they allow you to carry out the reverse the effective forces.

The working and auxiliary equipment of the scraper:

To the working equipment scrapers include the following components:

– the mechanism that controls the valve and bucket;

The bucket is a working capacity, is designed to be placed in layers of soil, which is developing the scraper. It also serves as a bearing frame, where the distributed part of the load from its weight, the soil and traction force. In the front part of it rests on the axle and the traction frame, and the rear – wheel axle. In fact, the bucket is a welded structure consisting of:

– buffer of the frame.

The front (bucket) wall is a valve whose task is to adjust the height of the loading slot in the recruitment process of the soil in the bucket. Pushing the soil from the bucket using the back of a moving wall, which is equipped with pusher and rollers. To control the bucket actuator uses hydraulic cylinders and lever mechanism.

Suspension is a completely unified front and rear wheels mounted on axles and the axles.

– a tractor-pusher. Tractor-pusher needed, when working on hard ground and stone rocks, and also at operation of powerful earth-moving mechanisms when the availability of the traction of only one tractor-tractor is not enough;

– cultivator. The rippers perform a preliminary loosening of the soil, which facilitates its further cutting by the scraper.

All kinds of auxiliary equipment allow to increase essentially efficiency parameters of main machine and prolonging their service life.

The advantages of scraper:

Like any machinery, earth-moving equipment has its own advantages over other similar machines. So, the scraper has:

– cyclical. One ongoing operation consists of many important components: the slice of the reservoir and its subsequent excavation, loading, structure and compaction of soil;

– automatic seal of stacked layers. Simultaneous placement and compaction of the ground wheels of the scraper allows you to refuse the use of other equipment designed for the job;

– reduction of production costs for the development of soil, its transportation and subsequent installation. These tasks are done by one machine, respectively, from the additional technique can be waived;

– the versatility. Scrapers are used in many industries of mining, road and other construction and at different stages of the work;

– high speed settings. Despite the size of the equipment, even fully loaded scraper is capable of speeds up to 50 km/h;

– the lack of difficulties with the repair. All the mechanical components of the equipment are characterized by high parameters of maintainability.

The use of a scraper:

The main areas of application are considered to be scrapers of various fields of mining, road and other construction. So, in hydrotechnical construction, they can produce the following work:

– development of soil in the grooves. High profitability observed in the construction of large channels whose depth is 5-7 meters;

In the mining industry:

In road and other construction:

– preparatory work for the foundations of buildings, structures and roads;

The greatest efficiency of application of these earth – moving machines are observed in latitudes with short winter period. In other climatic conditions, if the freezing of the soil reaches 20 cm, additionally require the use of rippers. A choice of scrapers for carrying out those or other works influenced by the shape and size of future structures, the best ones are rectangular recesses or pits without pockets and ledges, and various types of mounds. The size of the scraper is selected for a specific task, is determined by a preliminary economic calculations based on the amount of work.

The main parameters of quality the scraper will include the following indicators:

– bucket capacity geometric and (or) nominal

– operational capacity of the engine,

– maximum speed for the gear

– the maximum depth of the bucket,

– 80% of the resource before overhaul and limit state criteria,

– the average time to failure and criteria for failure,

– the sound level at the operator’s workplace,

– parameters of vibration on the workplace and government,

– the opacity of exhaust gases of the engine scraper,

– emissions of harmful substances with exhaust gases from the exhaust system of the engine scraper.