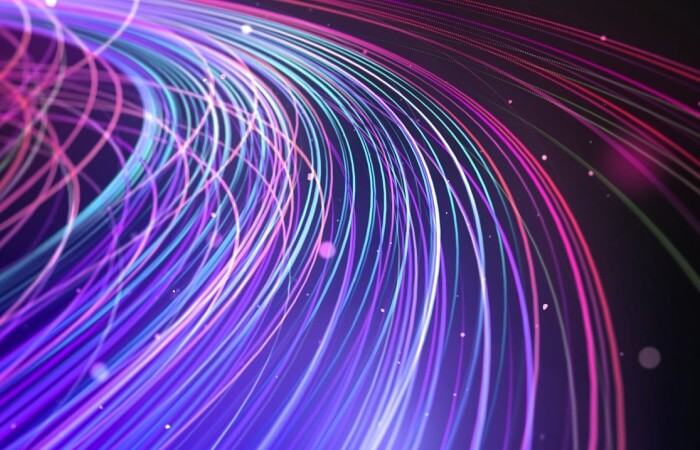 Fiber optic conductor are electromagnetic radiation light waves (mod) reflected in the movement from their walls and core (stem).

The structure and design of optical fibers

Material features and rules of operation

The use of optical fibers

The development of modern technology and the study of the properties of light waves allowed to create a qualitatively new environment that transports optical radiation. Guides for her steel waveguides having a circular cross section with an unusually small diameter, equal to only a few nm (almost like human hair). These transparent thin strands called optical fibers, and that is what is transmitted now, most of the information in modern communication networks.

Unlike optical fiber, the optical fiber conductor are electromagnetic radiation light waves (mod) reflected in the movement from their walls and core (stem). Due to the huge bandwidth and speed of data movement, every year the products find wide application in many sectors of the economy. They are used to improve the communication lines, increasing the processing power, solving problems in energy and medical industry, in military applications.

Fiber-optic communication lines (FOCL) replace the traditional “twisted pair” in the most important telecommunication networks of different levels of complexity. The spread of light which occurs due to the multiple wave multiple reflections from the inner surface of the shell. Due to the small difference in refractive index (about 1%) of the wave reflected by the core at different angles, do not go beyond the borders of the fiber and move in it, allowing you to transfer data with great speed. According to the data obtained from Japanese experts conducted research, it can reach 255 Tbps, even at distances over 1000 km.

The movement of waves in optical fiber are studied in the late XIX century, but the necessary technologies were still lacking. The first optical telephone system to transmit voice signals was patented in America in early 1934, but the waves are damped already after a few meters from the entrance of the fiber. To change the situation could only in 1970, when found materials, ensuring a sufficiently low loss (17 dB/km), and for the next two years his work has brought already to 4 dB/km at First in the production of used only quartz glass, but then it began to add forcincinnati, foraluminium and chalcogenide materials, the refractive index of which is close to 1.5.

Now there is a refinement and optimization of plastic optical fibers with core and polimetilmetakrilata vtorpolimermash shell. The expected attenuation in them another order of magnitude lower than the existing. Also, to improve the technical indicators began to struggle with out-of-round and concentrically fibers, their possible twists and sprains, started the process of selecting the optimal structure of the profile. Different manufacturers there are already numerous modifications to the fiber, so for a correct choice it is important to know its internal structure and classification.

The structure and design of optical fibers:

Despite the large variety of existing technologies to create an optical fiber in the manufacture of articles it is possible to allocate three main stages. The first creates a blank in the form of a bar having the desired profile and refractive index. For a second it stretches and becomes a protective shell. On the third (if necessary) on the fiber apply reinforcing and protective coating (buffer). To obtain the target refractive index in the optical fiber in the manufacture can be added various additives: titanium, phosphorus, germanium, boron, etc.

Given the geometric dimensions of the inner core and shell, and the distance between them, the received optical conductor can be single-mode (conveying only one main mode) and multi-mode (move numerous spatial modes). Optical fibers used for telecommunications are divided into the following categories:

In single-mode threads small losses at bends, multi-mode optimal for large distances, the polymer is more functional, quartz is significantly cheaper. When the fiber profile has the same refraction across the cross section of the Central rod, he stepped. When the refraction gradually decreases from the center of the core to the shell becomes a profile gradient. Refraction in a graded-index fiber can have a parabolic, triangular and broken structure. There are other varieties of fibers, occur less frequently.

During the movement of the light wave in the optical filaments are damped and dispersed. This radiation occupies the electromagnetic spectrum in the range 100 nm – 1 mm, but in reality, information is transmitted more frequently in the near-infrared (760-1600 nm) and visible (380-760 nm) range. The area where the attenuation of the low – transparency window. In the near infrared three of them: 850, 1310 and 1550 nm. They may vary slightly for each type of fiber, but in them it is optimal to transmit information signals.

In engineering networks serve as sources of radiation of optical quantum lasers, at small distances – LEDs. Their narrowly focused monochromatic beams of coherent radiation creates a wide continuous frequency spectra of the electromagnetic. As receivers that convert the optical signal into electrical use the p-in and avalanche photodiodes. Parameters of optical fiber is strictly certified by: core singlemode fiber has a diameter of 9±1 µm, multimode fiber – 50, 62.5, 120, 980 µm, the shell is 125±1 and 490, 1000 µm, respectively.

Single-mode fiber provides a more stable signal and high speed data transmission, but they need more powerful and expensive light sources than for multi-mode counterparts. Also they are very narrow optical channel, which significantly increases the complexity of installation, but also eliminates miodowy variance. From single-mode threads, there are three subcategories:

– speed with an unbiased variance (SM, SMF) are the most common;

– normal with dispersion shifted (DS, DSF) in the direction of the third transparency window with minimum attenuation tends to zero;

Multimode fiber is characterized by the highest performance transfer data on short distances, high speeds and wide bandwidth. It, in contrast to the single mode, where almost reached the limits of technology, continues to improve. Its core has a large diameter, which provides additional refraction, dispersion reduces the distortion occurring at the propagation of several modes with different reflected angles. In the end, the light pulses in such threads under the influence of the above factors are converted from rectangular to bell.

Material features and rules of operation:

The bandwidth of optical fibres is dependent on the attenuation (loss) and dispersion. Any reduction of these parameters allows to increase the distance between the points of the forced regeneration of the signal. Losses can be called as their own internal and external factors. The first is the heterogeneity of the core rod (core) of the products, characterized by its refraction, the self absorption of the materials and their component impurities. The second occur when twisting, warping and bending of threads.

Therefore, the technical conditions strictly reglementiert application rules, grouping, and maintenance of fibers. Excessive external mechanical impact can cause microfractures and disruption of the integrity of the shell, and this will cause uneven internal reflections in the thread. It is also important to monitor the homogeneity of material in the manufacturing process of filament and uniform distribution of impurities, capable of resonating at different frequencies.

Work with optical fibres impose strict requirements on the service personnel. First and foremost is the cleanliness of the connectors and quality of the necessary connections. Contrary to popular misconceptions, the biggest challenge for optical fibres is often hydrogen corrosion. Contact optical coupling is deferred in time, but already irreversible consequences, in which the thread loses its properties and becomes completely ruined. Bad connection made fibers can absorb moisture and at the same time become areas contributing to an additional attenuation losses of the transmitted signal.

Today, all projects using fiber receive intense development. First of all, it FOL (FOL), computer networks, video surveillance and access control, where “optics” has come to dominate in all positions. They virtually eliminated unauthorized interference, the lines will not burn, not oxidized, not dissolved, provide greater speed and bandwidth in data transmission. They are not afraid of interference and electromagnetic fields are not affected by short circuits, do not emit anything into the environment.

The use of optical fibers:

The optical fibers used as sensors that measure voltage, temperature, pressure and other parameters. They are compact and do not require additional support, tolerate high temperatures (in comparison with semiconductor prototypes). They are placed on the device performing arc protection. Also based on them are hydrophones for seismic and sonar devices, laser gyroscopes for cars and spacecraft.

Thanks to fiber optic interferometric sensors are working, the controlling magnetic and electric field, laboratory endoscopes. They can arrange coverage in difficult areas, directing solar and artificial light in the desired location. Finally, fiber helps form an image in different spectral regions. On this principle, developed modern weapons, helping to create the target dummy even the size of a aircraft carrier and disorient radar surveillance.