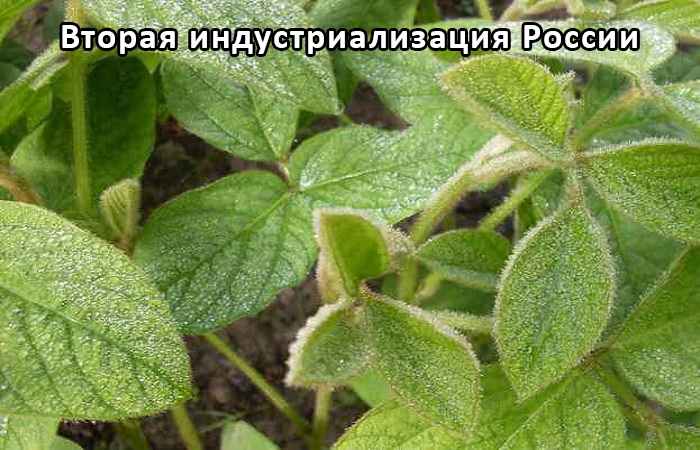 Mist setting Shokhin – mobile system long maintain on the ground with an optimal climate for different cultural plants and fungi in different climatic zones. Key technology – ensuring a regulated, warm rain of water mist with different organic fertilizing and elektrostaticheskie charge (air ions), allowing the use of radiant energy of the sun for a long time to encourage directional plant growth (the growth of the root system or aerial parts), significantly (30-40%) to increase the productive period of the growing season, increase yields.

The advantages of fog Shokhin

Air ions and the radiant energy of the sun

The nitrogen factor of the air microorgani

The essence of the “tow-Shokhin”

The use of fog Shokhin

Mist setting Shokhin (“tow-Shokhin”) is a mobile system long maintain on the ground with an optimal climate for different cultural plants and fungi in different climatic zones, the so-called klimatron on the open ground.

Key technology – ensuring a regulated, warm rain of water mist with different organic fertilizing and elektrostaticheskie charge (air ions), allowing the use of radiant energy of the sun long aimed to stimulate the development of plants (growth of the root system or aerial parts), significantly (30-40%) to increase the productive period of the growing season, increase yields.

Mist setting Shokhin “tow-Shokhin” working on the microclimate around the clock from early spring to late autumn. Adjustable spray amount of warm water, in the form of mist that moisturizes, cools or warms the ground the air and the soil. Fog can bring plants metered quantity of feeding at a certain phase of development. Charged particles of the mist, one or the other polarity, directionally stimulate the development of plants, i.e. the growth of the root system or aerial parts. 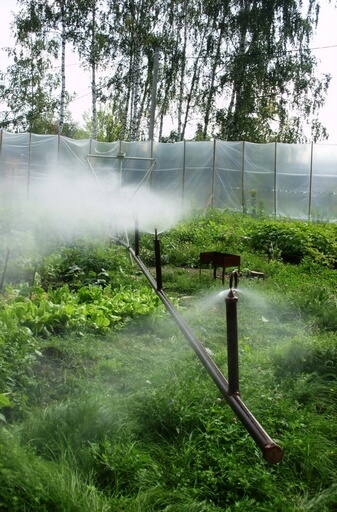 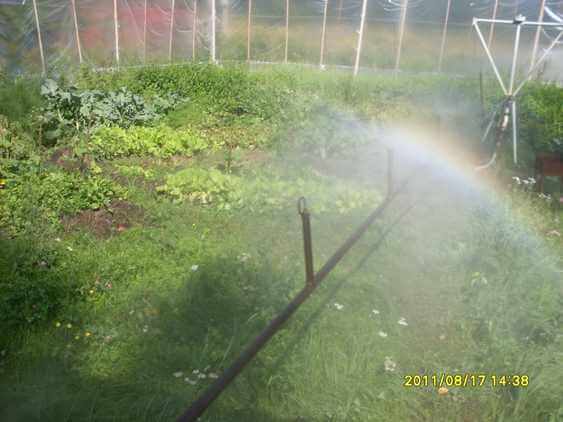 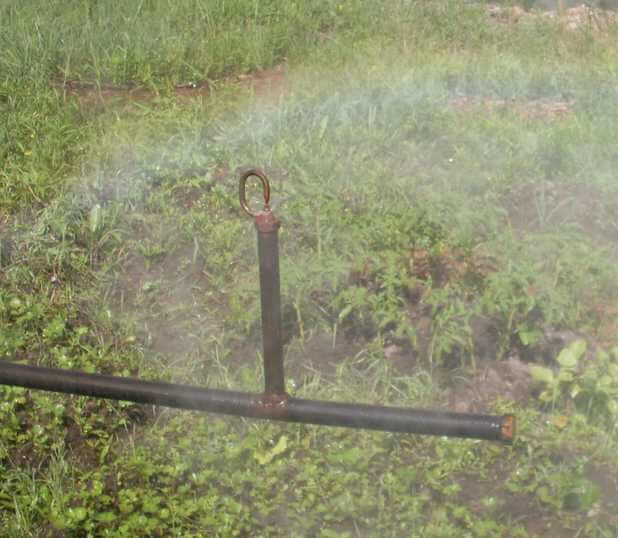 Early spring creates an opportunity to warm up the soil for rapid development of useful soil microorganisms. Fueling the sprayed water, the resulting precipitation is warm mist, warm ground-level air and soil. Thus, in “the cell” “tow-Shokhin”, even in strong frosts, it is possible to maintain a positive temperature of soil and ground layer of air, thereby to avoid destruction of plants. The result: heating of the soil and surface air (in spring and autumn frost), due to precipitation of warm mist, allows for example in the suburban climate, to increase the productive growing season up to 6-7 months. For the southern, dry regions can be enjoyed year-round cultivation of culinary herbs.

The advantages of fog Shokhin:

– increase the yield of plants in open ground,

– low cost of production in comparison with modern greenhouses and summer greenhouses,

– cell “tow-Shokhin” can be joined into complexes, covering a square field plots. Their automated use is not complicated a qualified management mobile phone,

– 20 times the savings of water compared to drip irrigation,

– electricity consumption not more of 0.0125 kWh/day per 1 m2, with severe frosts, for heating the spray water is additionally expended to 0.03 kW/h per 1 m2,

– in comparison with summer greenhouses and hotbeds in “tow-concluded” significantly reduced requirements in steel structures, pipes, sprayers and other materials.

Air ions and the radiant energy of the sun:

Air ions are very small complexes of atoms or molecules carrying positive or negative charge. Under the influence of the external factor molecule or atom of gas is reported the energy required to remove one electron from the nucleus.

A neutral atom becomes positively charged, and the resulting free electron attaches itself to one of the neutral atoms, giving it a negative charge forming a negative aeroion.

Depending on the size and mobility are three groups of ions: light, medium and heavy.

Under the influence of ionization in the air environment there are physical and chemical processes of excitation of the main components of air – oxygen and nitrogen.

In the area of the “TOU-Shokhin” ionization of the air takes place as follows: under the action of radiant energy (UV spectrum) of the sun – air, i.e., the molecule or atom it gas, reported the energy required to remove one electron from the nucleus. A neutral atom becomes positively charged, and the resulting free electron attaches itself to one of the neutral atoms, giving it a negative charge forming a negative aeroion.

Such positively and negatively charged aeroions in fractions of a second is attached a definite number of molecules and gases included in the composition of the air. As a result, complexes of molecules, called light air ions. Light air ions of the air colliding with fractions fog to form air ions larger size – the average air ions, further heavy air ions air ions and ultramarine.

Charge aeroion is its main characteristic.

The sizes of positive and negative ions and their mobility depends on the relative humidity.

In the fog the mobility of the heavy ions is reduced, which increases the likelihood of their attraction to the green surface of plants, charged oppositely.

For this reason, missing aeroionization in greenhouses that can never replace wholesome and nutritious air current “tow-Shokhin”.

Any covers: polycarbonate, film, glass, mesh etc. (absorption wavelength in the range of 400-200 nm ultraviolet radiation), reduce (absorb, diffuse) radiant energy from the sun, which leads to increased pathogenic microflora to common disease, slowing of the development. Conclusion: to increase the efficiency of the photosynthetic activity of the plant organism, the essential role of providing radiant energy of the sun, which allows you to not only healthy growth, but for the best taste cultivated plants.

Each crop requires (a certain water, air and thermal regime) the optimal microclimate.

Increasing the temperature above the physiological optimum of plants, leads to irreversible changes in their body. Lowering the temperature below the optimum, at freezing leads to weakening of the plants, development of disease and possible death of foliage. Prolonged exposure to such temperatures can lead to complete loss of the crop.

Lowering the relative humidity below 65% reduces the osmosis and the process of assimilation. The plant, redistributing moisture, use it only 90% for evaporation, cooling the surface of leaves, stems and fruits. This condition is called wilting or depressing. Simply put, the plant is not running.

Long-term exposure and further decrease in humidity and increase in temperature (above +30 gr.) leads to a complete loss of the crop.

The above is especially true for southern latitudes, where the relative humidity drops below 60% and temperature rises above +30 ° C, after 10 hours, and this mode is valid till 19 o’clock.

Conclusion: the plant in the open ground does not work for 9 hours every day.

Drip irrigation is the situation for many does not improve, and guarantee the safety of the plants from total loss, because it is not able to lower the temperature and raise the humidity of the environment.

Significantly improve the situation, to create a comfortable environment to the outdoors can only “tow-concluded” because the presence on the surface of the leaves and stems of the thinnest film of water eliminates transpiration, while photosynthesis is provided, and in the hottest hours without experiencing depression, the plant receives daily from 5 to 8 hours of comfortable conditions, i.e., the optimal microclimate, which affects active development, higher yields and early ripening.

The nitrogen factor of the air microporosity:

In the experiment with soybean confirmed the ability of sprayed water to attract and to fix nitrogen and its oxides from the air, thanks to its saturation of air ions by the action of radiant energy of the sun. When testing harvest the soybeans in three times more than in the control plot.

The essence of the “tow-Shokhin”:

The physical nature of air microporosity “tow-concluded” based on the distribution of finely atomized water for foliar cover of plants.

The degree of dispersion of the drops is that they do not roll off the leaves and remain on them until complete evaporation, cooling the ground part of plants and increasing the humidity of the surface air.

The water sprayed into fractions from 12 to 160 MK. as the heavy natural mist.

The dispersion of the spray Shokhin chosen so that a visual fraction – as it floats, but with the gravity move slowly down mixing with ambient air and small particles of water mixed with air, thus oxygen, carbon dioxide, nitrogen and other micro and macro elements that are always present in the air. As fine spraying water evenly over the entire cultivated area that creates an optimum microclimate for agricultural crops.

It is important that the presence on the surface of the leaves and stems of the thinnest film of water eliminates transpiration, while photosynthesis is provided, and in the hottest hours without experiencing depression, the plant receives daily from 5 to 8 hours of comfortable conditions, i.e., the optimal microclimate, which affects active development, increasing yield and early maturing.

The absorption of water vapor by the leaves of plants and redistribution of it (the water) of the aerial organs in the root system has long been known.

With fog, you can make the necessary dosed nutrient solutions (outside the root feeding) for the productive development of plants that can use a little suitable for agriculture land, including the desert Sands, down from a high concentration of salts and contaminants.

Essential for all plants: optimum moisture content (optimum environment) is achieved under natural conditions of open ground, which gives the healthy development and maturation of plants, without much of the vegetative mass and of the pathogenic microflora of greenhouses and polytunnels.

Full use of solar energy (even in the hottest hours of the day) gives the opportunity to significantly reduce ripening and heating of the soil (in the spring and autumn period of frost) and surface air due to the precipitation of warm mist allows, in the suburban climate, to increase the period of the growing season up to 6-7 months. 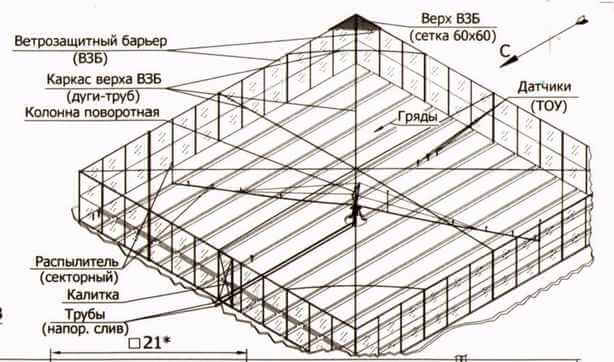 In the centre of “cell” sets the vertical column is rotatable with horizontally and oppositely located – two wings (pipes), with mist nozzles (nozzles Shokhin).

The water supplied through main pipe, with normal water pressure (2-3 ATM.) results in circular movement of wings (of a pipe). Some of the water is diverted into the wings on the nozzles (dispensers Shokhin) for fog. Water main pipe is fed intermittently, may be heated subject to local climate conditions.

The use of fog Shokhin:

– mass reproduction of the valuable agricultural crops (trees and shrubs) by green grafting,

– the cultivation of beneficial fungi and microorganisms.

Note: the description of technology in example fog Shokhin.