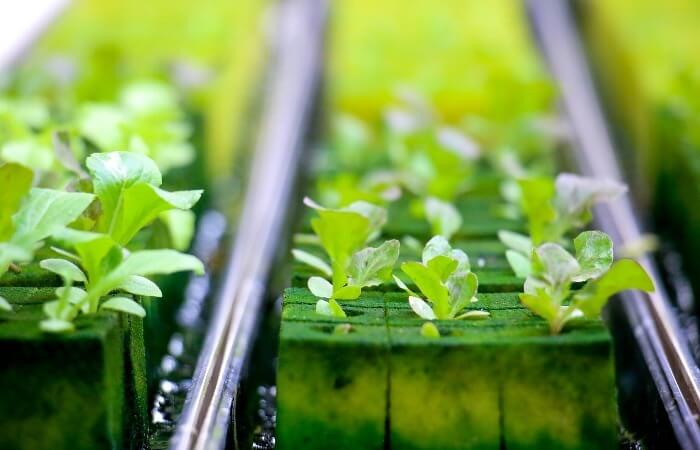 Hydroponics, the method and the basic hydroponic systems.

Hydroponics is a method of cultivation of agricultural crops in the absence of soil in an environment created artificially.

The method of hydroponics

What can you grow hydroponically?

The advantages and disadvantages, the benefits and harms hydroponics

To obtain the rich harvest humanity has sought for centuries, because of the number of grown gifts of nature depended on the people’s lives. In an effort to increase the yield of plants, farmers and business executives have sought to create optimal conditions for their growth and fruiting, but scientists have invented a special technique. Became one of the last hydroponics – a method in which plants are cultivated out of the soil.

Hydroponics is a method of cultivation of agricultural crops in the absence of soil in an environment created artificially. Thus all vital elements, without which the growth and development of plants, provides a special nutrient solution.

According to historians, the method itself was invented in ancient times, as there are indirect information. The name of the method comes from the Greek words “υδρα” — water and “πόνος” — work that literally means “working solution”.

The advantage of hydroponics is the fact that it allows to obtain a high yield even under conditions of marginal soils and soils not suitable for agricultural purposes. So, if you have a specific equipment necessary for the plants can be grown even in desert conditions. All that is needed is:

– a solution whose composition satisfies the need of green bio-organisms in nutrients;

– the ability to adjust the main external parameters that affect the viability of the gardens.

– light each type of plant needs a certain light intensity and its duration;

– humidity – violation of optimal parameters this parameter can lead to drought rhizomes or develop rot processes;

temperature – take into account theplaylist cultures and their resistance to extremes of weather conditions;

– the percentage of carbon dioxide in air for photosynthesis, each plant needs its own indicator.

The fulfillment of all these conditions allows to obtain an increased harvest (and if you want some!) for at least a short time period.

The method of hydroponics:

The basis of hydroponics is based on the method of feeding plants through the root system. For a long time scientists tried to figure out what is the role of soil in the growth and formation of the structure of plants, and that roots are extracted from the earth. The answer to this question was obtained during the experiments with aqueous solutions. So, in a glass bowl pour the distilled water and successively dissolved various chemical elements, and then put plants in them and observe whether the minerals absorbed by the roots.

During the experiments, it was found that plants need:

– potassium – in case of its deficiency slows down or stops the growth;

– calcium is necessary for the proper and complete formation of the root system;

– iron and magnesium – without their presence not carried out the processes of photosynthesis and the leaves cease to produce chlorophyll;

– sulfur and phosphorus – are required for the synthesis of proteins involved in the formation of the nuclei and protoplasm of cells plants.

Experiments have established that these elements are key for proper growth and development of plants, but they are insufficient for the full implementation of all its functions. Are, but in lower concentrations,which gave them the name micronutrients.

The results of these experiments in the middle of the XIX century, and almost simultaneously, scientists from Russia and Germany had invented methods of growing plants in water solutions. Almost a century later, in 1936, William Herrick tested this method and have grown with it, first vegetables, then that is called hydroponics.

The first time the cultivation of plants was carried out exclusively in water enriched with the relevant chemical elements, without substrate. However, in such circumstances, the oxygen enrichment of the roots was very low, which has affected the stability of the solution – she is also decreased. Ultimately impact on the viability of root systems – they are weakened, some dying. These results have given impetus to improving the method and developing the same methods. So there was a method in which the roots were placed in inert substrate and immersed in the working solution, enriched with essential nutrients.

The substrate can vary, which affects the specificity of the methods:

– agregatniy – the location of the root system is held on a solid inert substrate, which is used as sand, crushed stone, gravel, etc.;

– aeroponika – substrate is completely absent, the roots of plants are placed in air chamber with a small light.

Being inert, i.e., devoid of nutrients, substrate performs one task serves as a support for the root system. The absorption of nutrients by the roots is several times faster, enriching them with oxygen – more intense, which, in result, promotes more rapid growth and development of plants. The last one is provided and by the fact that the vegetable organism doesn’t need to waste my life energy on searching in the soil of the necessary chemical elements they are next in abundance and easy access.

Another feature of hydroponics is the lack of need for frequent watering, which promotes water conservation. This is a powerful argument for the application of this technology in countries where there is a shortage of fresh water.

What can you grow hydroponically?

A great value in hydroponic method, is paid to the saturation of plant roots with oxygen aeration. Because the nutrient solution is inert, oxygen is virtually no, therefore, the first phase of the cultivation process it is important to place capacity with seeds. This left an air space between the liquid and Foundation, replacement of the solution is carried out monthly.

It is best in such conditions grow:

– almost all kinds of bean;

A good crop of these gifts of nature is possible in production scale and in small household.

The air gap is 3 cm for plants with a shallow root system and a 6 cm – large, and the root is in the water all the time. It is therefore not all crops are suitable for growing hydroponically. So, some roots are too delicate, their structure precludes significant growth, and this causes more frequent changes of the solution as a way to eliminate decay. As a consequence, increases the cost of growing products. So, not recommended for hydroponics:

– root crops (potatoes, beets, carrots) – abundant amount of moisture will cause decay and death of roots;

fungi, characterized by the rapid growth of the rhizome;

– the short-lived bio-organisms, which die off quickly leaves or flowers – these plants need more frequent cleaning from dried flowers, otherwise the solution itself is a hydroponic system is badly clogged;

– plants require steady temperatures they do not tolerate changes in temperature, typical of hydroponics, and start to rot.

Types of hydroponic systems are several, but conventionally, they are divided into two types:

Active – imply the existence of a system of circulation of the working solution, which is most often used classic pump. Also necessary aeration of the roots, which is carried out in parallel.

Passive – eliminate the movement of the liquid (standing water) in a hydroponic system, nutrients are supplied to the roots using capillary action (wicks), which gave them a second name – wick.

Both types of hydroponic systems are modified, compiled on the basis of the following basic types:

– wick system – on the bottom of the container with seeds poured perlite, the top is placed a filter, which will be supplied with nutrients and is sprinkled over the top land. The drawback is the limited capacity of the wick which extended this technique is only for decorative plants;

– the floating platform or method of deep-sea cultures – the roots of green bio-organisms are completely immersed in the liquid to remain in it 24 hours a day. This necessarily additional supply to the liquid oxygen. The method is recommended for small plants whose life cycle requires a large amount of moisture;

– the system of periodic flooding involves immersion of the substrate, acting as a frame rhizomes in a liquid with dissolved nutrients. The design has two tanks, upper and lower. At the top are containers (bottles, cups, etc.) with seeds or seedlings, and it automatically (via timer) when pumped by a pump the nutrient solution from the lower compartment. After the prescribed time period open valves, and the liquid flows into the lower tank (open the gates). After a certain period of time the steps are repeated. Another option – the roots are located at the bottom of the empty tank, where ever there is a small quantity of nutritious liquid;

– the technique of the nutrient layer – the method implies irrigational channel (usually it is a tube) on its bottom drains constantly working solution. The roots are not submerged in water, which ensures obtaining the necessary oxygen, but nutrient fluid constantly bathes them, filling nutrient. Draining, water enters the tank where the pump is delivered again to the beginning of the irrigation canal. One of the most effective and economical methods;

– drip irrigation – the most famous and common method in which the nutrient fluid is delivered directly to the roots of the seedlings with drip tape. The fluid supply is carried out automatically;

– aeroponika – the roots of seedlings are in the air constantly blown by water suspension. The most high-tech methods that ensure the highest yield.

The advantages and disadvantages, benefits and harms of hydroponics:

Hydroponics is a great technique for getting higher yields in almost all sectors of agriculture. These results become possible by providing plants all the necessary nutrients, thus they go directly to the roots. As a result, the intensive growth of strong and healthy bioorganisms, increased flowering and more rapid ripening than when growing in soil.

Because cultivation eliminates planting seedlings and seeds in the soil, it is possible to exclude the presence in the fruit of toxic substances – nitrates, toxic elements, radionuclides, salts, metals and other chemicals. This fact is relevant for plants whose fruits are consumed as food, especially children.

Method of hydroponics is quite economical: green spaces don’t require daily care in the form of irrigation, as most of the systems involves the circulation of one busy useful elements of a solution within a few weeks (as necessary chemical elements are added to the solution). You can also configure automatic supply water, to adjust an individual approach to each plant, which will reduce labor costs and end product cost.

The use of hydroponics eliminates phenomena such as drying and oxygen deficiency that often occurs when agricultural work in the soil. The same perennial transplanting plants from soil to hydroponic system is virtually painless because of the injury to the rhizomes does not occur.

Another advantage of the method is the possibility to abandon the chemicals that destroy or prevent pests, fungus, mold and other microorganisms. The emergence of the past with the hydroponic method of cultivation is excluded. Pleasant and care of plants in hydroponic systems – the lack of land allows you to maintain the cleanliness of the room, to forget about unpleasant aromas.

In General, hydroponics is a technology through which it is possible to increase the yield of many crops, while the resulting fruits will be clean and safe.