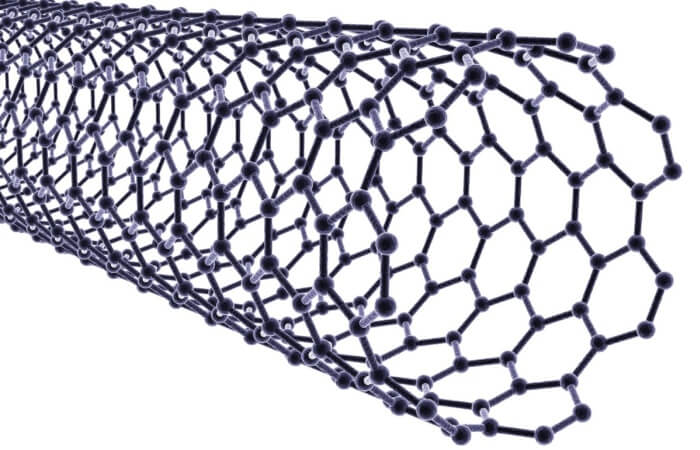 Carbon nanotubes are carbon modification of carbon, which is a hollow cylindrical structure with diameters from tenths to several tens of nanometers and a length of one micrometer to several centimeters, consisting of one or more rolled up graphene planes.

Types and classification of carbon nanotubes

Properties and advantages of carbon nanotubes

Carbon nanotubes are carbon modification of carbon, which is a hollow cylindrical structure with diameters from tenths to several tens of nanometers and a length of one micrometer to several centimeters, consisting of one or more rolled up graphene planes.

Carbon nanotubes are one of the allotropic forms of carbon , alongside diamond, graphite, graphene, fullerene, carbyne , etc.

If you look at a carbon nanotube in a microscope with a magnification of a million times, we can observe a hollow cylinder, the surface of which is formed by many hexagonal polygons. At the top of the equilateral polygon is a carbon atom. Carbon nanotube visually resembles a sheet of paper rolled into a tube, only instead of paper the surface of graphite should be considered (more precisely – GN) plane. In the scientific community of the cylindrical plane of the tube is called graphene. The thickness of the graphene plane does not exceed one atom of carbon.

The physical properties of nanotubes are in direct dependence on the chirality (a characteristic of the smallest particles of matter do not overlap completely on its mirror image). The degree of chirality determined by the dependence that exists between the special indices of chirality (n, m) and a certain angle of tapering of the tube (α). 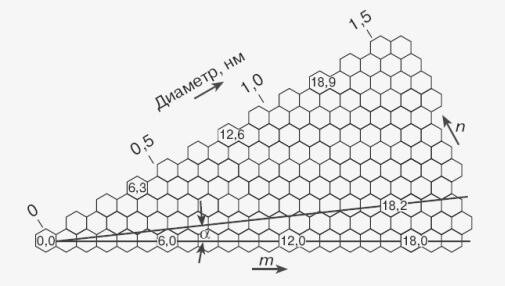 The chirality indices (n, m) are coordinates of the radius-vector R in a given graphene on a plane oblique coordinate system that defines the orientation of the axis of the tube relative to the graphene plane, and its diameter. The indices (n, m) indicate the location of the hexagon mesh, which result from the coagulation tube must coincide with the hexagon at the origin.

Types and classification of carbon nanotubes:

Depending on the chirality indexes are distinguished: straight, jagged, zigzag and helical carbon nanotubes.

The number of graphene layers, carbon nanotubes are divided into single-layer (single-walled) and a multilayer (multi-walled).

The simplest nanotube includes a single layer. The diameter of single-layer nanotubes may be one nanometer, the length is to exceed the previous option thousands of times. Single-layer nanotube is often identified with “pattern” of graphene with a grid structure consisting of countless regular polygons.

Multilayer nanotubes contain multiple layers of graphene. They are characterized by a wide variety of shapes and configurations. With a variety of structures can be seen in both the longitudinal and in the transverse direction. Here are the following types:

– nanotubes as a set of coaxially nested into each other cylindrical tubes, so-called “Russian dolls” (russian dolls),

– nanotubes as a set of nested into each other coaxial (hexagonal) prisms,

– nanotubes in the form of a scroll (scroll).

The distance between adjacent graphene layers is 0.34 nm, as in ordinary graphite.

The type of ends of carbon nanotubes are:

– closed (ending with a hemisphere, which can be considered as half of the fullerene molecule).

Electronic properties of carbon nanotubes are divided into:

metal. The difference between the indices of chirality (n – m) is divisible by 3 either of the indices are equal,

The conductivity of nanotubes depends on their chirality, i.e., the symmetry group, which belongs to a specific nanotube, and it is a simple rule: if the indices of the nanotube are equal or their difference is divided by three, the nanotube is a semimetal, in any other case, they show semiconducting properties.

Properties and advantages of carbon nanotubes:

– has adsorptive properties. Can store various gases, e.g. hydrogen. Once inside atoms and molecules can no longer go outside, because the ends of the tube are sealed and pass through the graphene plane of the cylinder, they can not, because of the carbon lattice are too narrow for most atoms,

– improved performance of other materials in addition to their structure,

– high strength. Carbon nanotubes are stronger than the best steels to 50-100 times

– are six times less dense than ordinary steel. This means that materials based on carbon nanotubes with the same volume would be ten times stronger. Nanokabel length from the Earth to the moon, consisting of a single carbon nanotube can be wound on a spool the size of a poppy seed,

– have a young’s modulus of carbon nanotubes is twice that of conventional carbon fibers,

a small thread of carbon nanotubes with a diameter of 1 mm can withstand the weight of 20 tons, hundreds of billions of times larger than its own mass,

– high resistance to wear and tear. Reusable strain (thousands and tens of thousands of cycles of twisting/untwisting, compression/stretching per minute) nanotubes not in any way affect their strength, their electrical and thermal conductivity. Any signs of deformation or wear no,

– increased electrical and thermal conductivity. The conductivity of copper as the best metal conductor in the periodic table, is 1000 times worse than carbon nanotubes. In this case, the conductivity of the tubes depend on the chirality index. In some cases, nanotubes may be semiconductors, in others to exhibit properties almost perfect conductors. In the latter case, using nanotubes, it is possible to pass the electric current value of 107 A/cm2 and thus they will not produce heat (in a conventional conductor made of copper would go away),

– the reciprocal relationship between the electrical and mechanical properties

the toxicity and Carcinogenicity similar to asbestos fibers. However, toksichnosti and Carcinogenicity of nanotubes (like asbestos fibers) is very different and depends on the diameter and type of fibers. To date, research continues on the issue of biocompatibility of nanotubes with living organisms. In any case, when working with nanotubes should be respected security measures, and primarily to provide protection of respiratory organs and digestive organs,

– occupy an intermediate position between crystals and single atoms. Therefore, the application of carbon nanotubes will contribute to the miniaturization of devices,

– having a high conductivity to efficiently dissipate the heat

catch the radio waves with frequency from 40 to 400 MHz (conventional AM and FM waves), and then amplify and transmit them

The most effective methods of nanotube synthesis are:

chemical deposition substrate from the gaseous medium under the action of a catalyst at a temperature of 700°C (CVD).

– thermal sputtering of a graphite electrode plasma arc discharge in an atmosphere of helium.

However, as a result of these methods is a mix of various carbon nanotubes: multi-walled and single-walled, with different diameters, with different indexes of chirality and therefore different properties. Therefore, there is a serious technical problem of separation of nanotubes with given parameters.

The application of carbon nanotubes:

anti – fouling paint (to protect the underwater parts of ships), 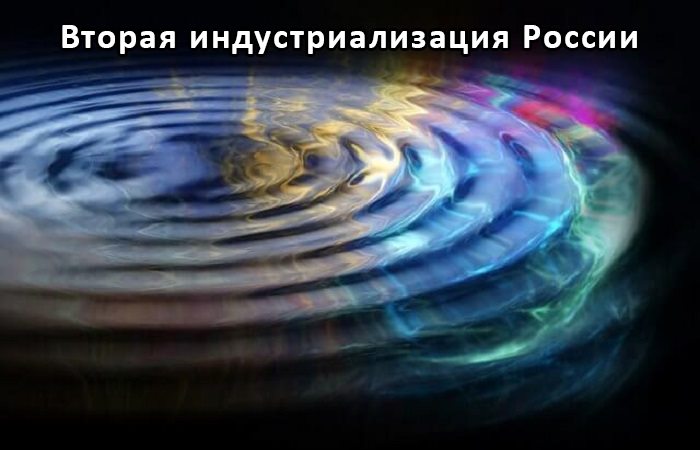 The vibration isolators on the basis of the material “metal rubber” 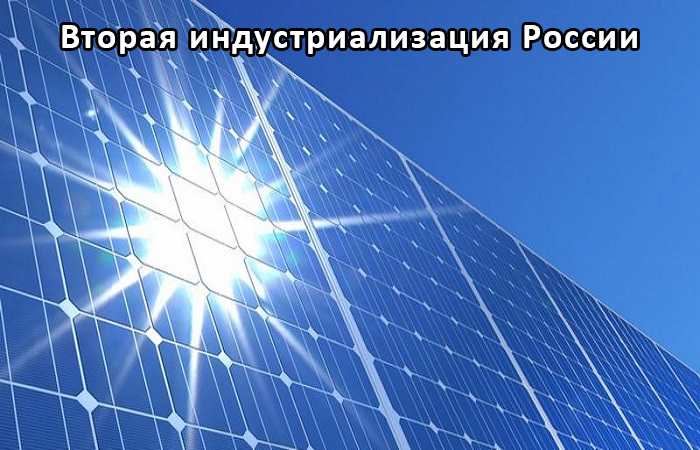 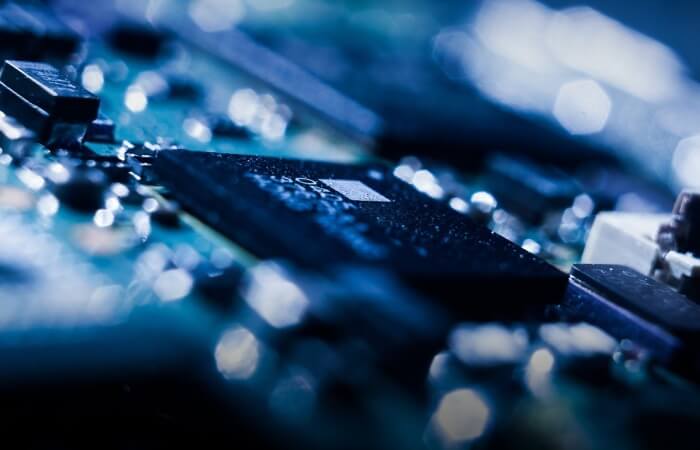 Gallium, the properties of atoms, chemical and physical properties