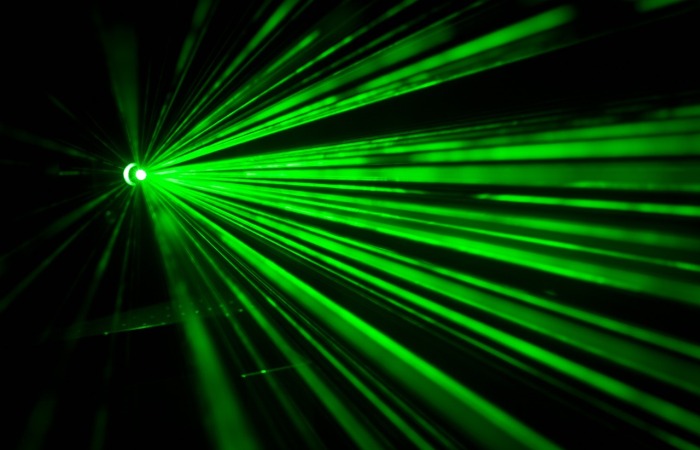 Laser argon – ion gas laser in which the active medium for obtaining coherent electromagnetic waves in the visible and ultraviolet regions of the used argon.

Laser argon – ion gas laserin which the active medium for obtaining coherent electromagnetic waves in the visible and ultraviolet regions of the used argon.

Argon laser belongs to the ion type laserin which laser transitions occur between the levels of energy of the ions.

The world’s first argon laser was invented in 1964

Argon laser is a continuous emission, which can reach several hundred Watts. Efficiency of the argon laser is 0,1-0,05 %, and it requires a great power – a few kW.

Argon laser emits about 25 lines in the visible range (from nm to 408,9 686,1 nm) and more than 10 lines in the ultraviolet (from 275 to 363,8 nm). However, the strongest intensity lines are at 488 nm (green line) and 514.5 nm (blue line). To obtain monochromatic radiation in a particular line spectrum of light inside the optical resonator (mirrors) an argon laser is injected a dispersive element, in the case of simultaneous generation of multiple spectral lines.

In argon laser, as in all ion lasers, population inversion of excited argon atoms is achieved using electrical discharge as the result of a two-stage process – two consecutive collisions of argon atoms with electrons of the electrical discharge. The first collision ionizes the atom (i.e., a neutral atom of argon is transferred to the ground state of the ion AG+) and the second excites the ion. Further, argon ions moving from the excited state to the ground, give a quantum of electromagnetic radiation (photon).

The device is an argon laser device is similar to any other gas laser, but has some peculiarities. Argon laser is filled with gas – active medium gas discharge tubes having the form of a capillary with a diameter of about 5 mm and made of oxide of beryllium. The discharge tube is closed from one side of the fully reflective mirror, and on the other hand, the output semi – transparent mirror. In addition, the ends of the gas discharge tubes are connected to each other gas bypass pipe to ensure the free circulation of gas. As the pumping source acts as an electric discharge of high density from 100 to several thousand A/cm2. In the gas discharge tube creates a low pressure on the order of 13,3322 PA. The discharge tube is provided with a cooling system using liquid as the argon laser produces a large amount of heat. To increase the concentration of electrons in the center of the discharge tube by means of magnets creates a magnetic field which compresses the discharge and does not allow him to touch the walls of the tube.

Argon lasers are used for pumping of continuous dye lasers for scientific research (the study of the interaction of radiation with matter), in laser printers, in laser surgery and in the technical equipment of entertainment programs.