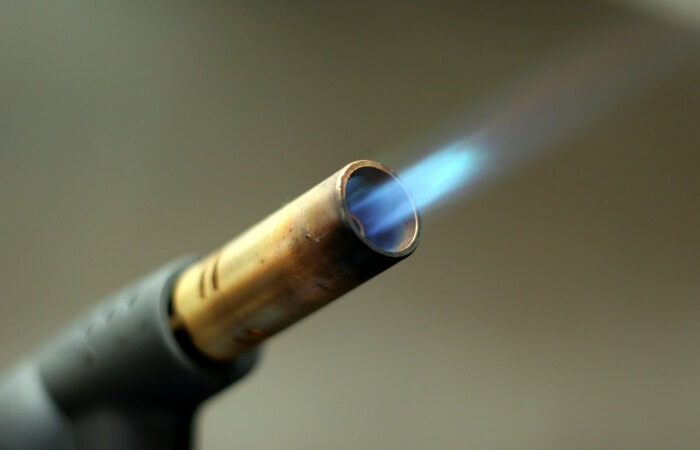 Production of acetylene in industry and laboratories

The application and use of acetylene

Explosiveness of acetylene and safety in handling

The structure of acetylene molecule:

Acetylene has a triple bond between atoms of carbon.

Acetylene – a colorless gas, without taste and smell. However, the technical acetylene contains impurities – phosphorous hydrogen, hydrogen sulfide, etc., which give it a pungent smell.

Easier air. Density compared to the density of the air of 0.9.

Acetylene is among the few compounds, combustion and explosion which is possible in the absence of oxygen or other oxidizing agents.

Mixtures of acetylene with air is explosive in a very wide range of concentrations. Explosion hazards are reduced when diluted acetylene other gases, for example nitrogen, methane or propane.

Acetylene requires great care in handling. May explode from shock, when heated to 500 °C or when compressed above 0.2 MPa at room temperature. A stream of acetylene released into outdoor air, can ignite from the smallest spark, including static electricity discharge from the finger. Storage of acetylene using special cylindersfilled with porous material soaked with acetone. They acetylene is stored in solution with acetone.

Acetylene has a slight toxic effect.

Chemical properties of acetylene are similar to properties of other representatives of a number of alkynes. So it is characterized by the following chemical reactions:

The reaction proceeds by stages with the formation of derivatives of alkanes.

6. the combustion of acetylene:

7. the oxidation of acetylene.

The reaction and its products are determined by the environment in which it occurs.

Production of acetylene in industry and the laboratory. Chemical reaction – equation acetylene:

Acetylene in the laboratory is the result of the following chemical reactions:

1. the action of water on calcium carbide:

Acetylene in the industry receive in the following ways and methods:

First get lime from calcium carbonate.

Then get a carbide of calcium, fusing calcium oxide and coke in an electric furnace at a temperature of 2500-3000 °C.

Further, calcium carbide is treated with water at a known reaction.

High-temperature cracking of methane is carried out according to known reaction degidrirovaniya of methane in an electric arc furnace at a temperature of 2000-3000 °C and a voltage between the electrodes of 1000 V. the Output of acetylene is 50 %.

6. the various modes of pyrolysis of methane:

Thus, during the regenerative pyrolysis first burn methane and heated up the nozzle of the furnace to 1350-1400 °C. Then through a heated nozzle to cut off flow of the methane, thereby forming acetylene.

In the course of oxidative pyrolysis of methane is mixed with oxygen and burned. The resulting heat serves to heat the remainder of the methane to 1600 °C, which digidrive in acetylene. The yield of acetylene is 30-32 %.

During the homogeneous pyrolysis of methane and oxygen is burned in a furnace at a temperature of 2000 °C. Then, preheated to 600 °C, the remainder of the methane is passed through the furnace, thereby forming acetylene.

During pyrolysis in an environment of low-temperature plasma methane is heated by a jet of ionized gas (argon or hydrogen).

The application and use of acetylene:

– as a raw material in the chemical industry for the production of acetic acid, ethyl alcohol, solvents, plastics, synthetic rubbers, aromatic hydrocarbons,

– for gas welding and cutting metals,

– as a source of very bright, white light in the Autonomous lamps, where it is obtained by the reaction of calcium carbide and water.

Explosiveness of acetylene and safety in handling:

Acetylene burns and explodes even in the absence of oxygen and other oxidizing agents.

Mixtures of acetylene with air is explosive in a very wide range of concentrations.

A jet of acetylenereleased into the open air, can ignite from the smallest spark, including static electricity discharge from the finger.

Vzryvaet acetylene depends on many factors: pressure, temperature, purity of acetylene, the content of moisture, the presence of catalysts and other substances and other reasons.

Explosiveness of acetylene decreases with dilution of acetylene with other gases, for example nitrogen, methane or propane.

Under certain conditions acetylene reacts with copper, silver and mercury to form explosive compounds. Therefore, in the manufacture of acetylene equipment (e.g., valves, cylinders) do not use alloyscontaining more than 70 % Cu.